So this is my first time seeing a band in different ends of the country on the same tour. Manchester, Glasgow and then London. For most bands, I’ll see them once on their tour and just leave it there, but You Me At Six are my favourite band and I don’t think I could ever get enough of them.

The first date which I went to was the first night of tour in Manchester. It was a lovely day in Manchester, with the sun shining down on the eager fans in the queue. The first night of tour is usually the most exciting night, no one knows the set list nor does anyone know what to expect, and that is why I really enjoyed the Manchester date. Supporting You Me At Six on this tour were Black Foxxes and Tonight Alive. Black Foxxes were the first support band and powered through their 90’s grunge and emo influenced songs, before Tonight Alive really got the crowd going. The female lead Australian band put a great setlist together, balancing between their two albums, The Other Side and Human Interaction. They even performed a couple of my favourite songs, Hell and Back and The Other Side. For me, out of them and Black Foxxes, they were the better support band simply because I knew them better and they put on a better show, but I do give credit to Black Foxxes as they put on a good show. It almost felt like Tonight Alive were co-headlining with You Me At Six as the vast majority of the crowd knew them and were singing along to every song.

After Tonight Alive lit up the crowd with their set, the short break between them and the headline act filled the room with anticipation. The songs between the breaks were some emo favourites, including I Write Sins Not Tragedies by Panic! at the Disco and Stressed Out by Twenty One Pilots. These songs kept the crowds vocals up, before the house lights turned off which signified that it was time for You Me At Six. One by one, members of the band walked on to stage, before they dropped the first song on their set list, Night People. I thought it was a strange song to open with considering that they ended the setlist on the last tour with this song, but it turned out to be a good move since the heavy bass riffs got the crowd pumped. Following Night People was Underdog, which is one of the their biggest songs and this was really fun. The next few songs were classics, including Stay With Me and The Swarm. Not knowing what song was next added to the excitement, and not knowing that they’d throw Save It For The Bedroom into the setlist really sent the crowd wild. I was on Max’s and Matt’s side for this show and it was so fun, with me and Max singing Arsenal songs during breaks between songs. To me, it is one of the best feelings ever to be recognised by members of my favourite band.

One moment of the gig that really got me was Josh’s speech before Take On The World. Josh’s wise and inspirational words for compassion really struck me, and Take On The World fittingly followed the speech, especially when he ended the speech by expressing that we should be free to do what we want, without being told by others what we can and can’t do. 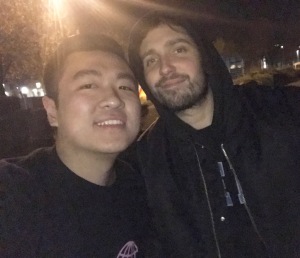 The night ended with an encore of Lived a Lie, Give and Room To Breathe and the crowd really responded well to it. Following the gig, I received a guitar pick from Max and a drum stick from Dan. I was so happy after the gig and was made even happier when meeting Matt and Josh afterwards. Matt stayed and chatted for about 10 minutes, whilst Josh stayed to talk to fans for almost an hour. Not often you will meet the lead singer of your favourite band and they would stay and chat with you for such a long period of time. It was a very humble thing for Josh to do, and he even told security to take the fencing away because he didn’t care that he was famous.

The next night of tour for me was Glasgow, just over a week after the Manchester date. I went up to Glasgow a day before the gig so I could spend some time with my friend Rachael who I hadn’t seen in a while. We went to Nando’s before going for an early night. Again, we queued quite early on, and was joined by Sam who had come up from London, but we made loads of new friends before doors opened. Before the gig, I briefly met Max and he was so lovely as he always is.

This night was probably the wildest night of tour for me. The Scots really know how to party, especially with their famed “here we, here we, here we f**king go” chants. Josh even said that he was looking forward to this date, and the Scots really put up a show as he eventually said that it was his favourite night of the tour so far. Cardiff and London had a lot to live up to following this.
Following the gig, I met Matt who climbed over the fencing to take photos with a few fans, and also met Josh very briefly. Credit to Josh for coming to say hi even though he was unwell and we said that he should be in bed.

My final night of tour was Alexandra Palace in London. I had very mixed feelings for this show. I was looking forward to it since I was seeing my favourite band in such an iconic venue in the capital of England, yet I also wasn’t looking forward to it because it marked the end of the Night People tour.

I came down from Glasgow the night before the gig, and thankfully, my friend David let me stay in his flat to save me from spending money on a hotel. We went for food together and then went home to film some videos for his YouTube Channel. Here is one of the videos we filmed, and I really enjoyed taking part!

Early on Saturday morning, I went to start queueing for the final night of tour. The queue was already quite long, despite the typical cold English weather. But as the day went on, the weather improved and the queueing went by in a flash as we spent the time larking about and making new friends. But then as I was going into the venue, it really hit me that this was the last time I was going to see You Me At Six for a while. I got a spot quite central on the barrier, so the queuing was definitely worth it. Again, Black Foxxes powered through their support slot before Tonight Alive truly warmed us up for You Me At Six for the last time. However, one thing which I noticed was the presence of more camera crew, as well as pyrotechnics and confetti machines. This got me even more excited for the show, as non of the other dates I have attended had these present.

So this was it, the final time I was going to see my favourite band for a few months, and what better way for this occasion, in London, with all my favourite people. The lights went out in the beautiful Great Hall of Alexandra Palace, and Night People literally set the venue alight, with the heavy bass and guitars, and with the addition of the flames behind the band and then the multicoloured flame throwers between the band and the fans. Oh what a show we were in for. I danced and sang every song as loudly as I would do at all You Me At Six shows. Although it was evident that Josh was struggling with illness, he still did absolutely amazing with his vocals. I can’t praise Josh enough for not cancelling dates of this tour even though he was so unwell, yet he still put 110% into the performance like he always does. Everything about this show was amazing, from having Josh see me on the barrier and doing our little gang sign, the atmosphere and the togetherness in the venue.

People ask me: “Don’t you get bored of seeing the same band over and over again?” and my blunt simple answer is no. I will never get bored of You Me At Six. Even though the set list was the same for the three dates I went to of this tour, each show was so special in its own way. Manchester providing the excitement, Glasgow provided their famed atmosphere and London provided me with the emotions. I’m going to miss this tour, from waiting in the cold to meet the boys, to making new friends.

If for some reason, Josh, Max, Matt, Dan or Chris read this blog, I want to thank you guys for so many things. Firstly, for being there for me when no-one else was. Whenever I was down (but definitely not out), I could always turn to your music to help me back up. No one does it better than you guys. Secondly, I want to thank you guys for gifting me with the friendships I have made with the people who share the same passion as myself. I know you guys have probably heard this a thousand times, but honestly, I could never thank you guys enough for what you have done for me.